How ’bout them Steelers!!! It was a great game, despite all the stupid penalties on both sides. I was at my friends’ Dave & Laura’s house for what I think is the seventh year in a row. On top of the good game and hanging with my friends, I won the box pool! Woo hoo!!!

So last week was INSANE!

Monday I had a VO audition in NYC for Six Flags courtesy of IFM.

Tuesday wasn’t too bad, but I did see “The Wrestler” with Mickey Rourke and Marissa Tomei. It was INCREDIBLE! Go see it.

Wednesday I had a gig for a new client courtesy of a brand new agent! The Viola & Shari Talent Group found me online and I booked a gig for a fertility drug called Gonal-F. I played a Formula 1 driver for their medical narration. I was “chasing down” the competition, get it? I recorded the gig at Blue Light Digital Sound in Mount Holly, which is in the same building as VS Talent. Everyone was really nice. The only drawback was I had to drive in that horrible weather that day, but all in all it wasn’t too bad.

Thursday I ventured into NYC to record three sentences at CKP Media that we missed for that Nestle gig. The gig so nice they paid me thrice!

Friday I was in NYC yet again for a Pearson VO gig at Full House Productions. I bumped into our very own Nancy Wu again. Yay, Nancy!

Teddy of Team T.E.R.R.A. has produced yet another awesome sketch for the EPK. Check it out! 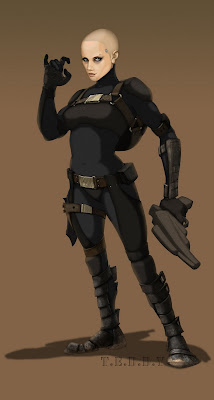 Isn’t she amazing?! The guns aren’t finished which is why her right hand is looking all arthritic. Another great job as always, Teddy!

TIP OF THE WEEK: Let’s pick up where we left off on Technique. I listed a bunch of websites to help you out, but let’s talk about actual technique, using your instrument.

One of the most important aspects of good technique is breath control. Having a large lung capacity so you can utter long and often poorly structured sentences is critical. It is possible to increase your lung capacity, at least in my experience. For the record, I’m neither a doctor nor a teacher. I’m just going to share an exercise I was taught and it has worked wonders for me.

When I was a freshman in college I took a singing class. The teacher (whose name escapes me) taught us how to expand our ribcage to increase our lung capacity. I was one of the only two students in the entire class who could do it correctly. Just lucky I guess! Put your hands on the sides of your ribcage. Now, without inhaling, move your ribcage out, then back in. If some air is being forced in & out of your lungs that’s fine, but don’t breathe in or out to help move your ribcage. Once you’ve got the hang of that, expand your ribcage, then inhale & exhale but leave your ribcage expanded. Remember, your lungs are balloons and they stretch. Pretty soon you’ll notice you have a larger lung capacity. When I got X-rayed at the emergency room for my kidney stones the radiologists were amazed by the size of my lungs! They said I have the lung capacity of an Olympic swimmer. Oh, and by the way, don’t smoke anything, ever! If you can’t quit, quit the business.

QUOTE OF THE WEEK: Never let your sense of morals get in the way of doing what’s right. Isaac Asimov

FOOD FOR THOUGHT: What do you do to keep your instrument in shape?

Have a great week!